Fighting To Take Back Our Lives 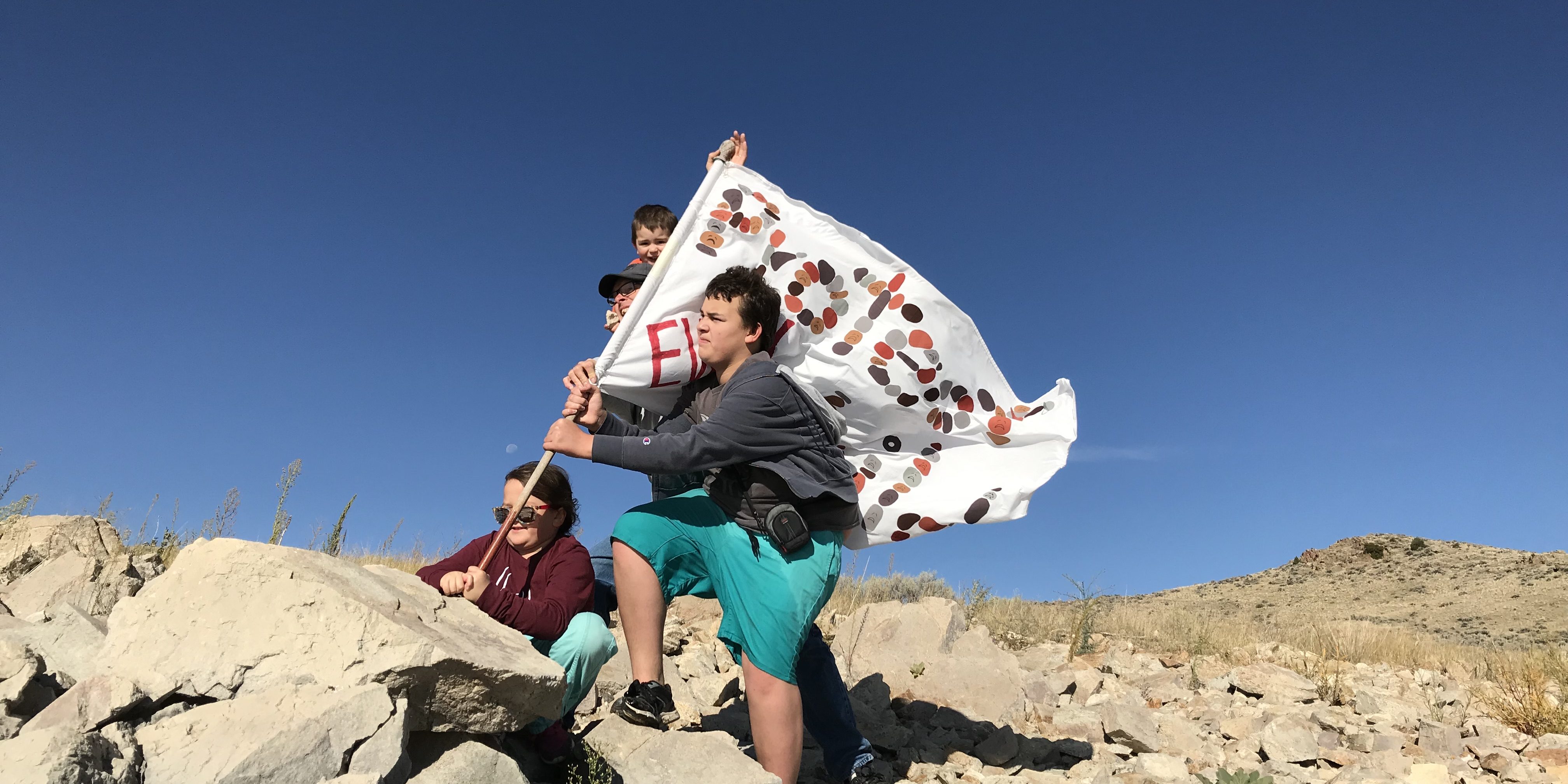 On Wednesday, September 18, 2019,
the Moore Family returned to flying their banners
in support of Protect Every Child’s #FallColorTour

was on the beach of Horse Prairie Campground at Clark Canyon Reservoir,
which is located about 20 miles south of Dillon, Montana.

“We had two Protect Every Child flags, mom Katie’s homemade flag, and a Title of Liberty flag we bought a few years ago.” 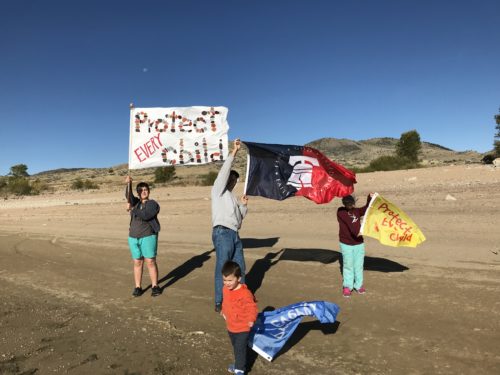 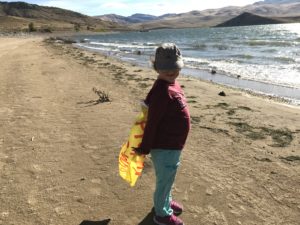 “At one point our daughter decided to tuck

the yellow Protect Every Child banner under her arms,

creating a cape, so she could be just like Sam.”

Sam’s response: “Oh that is so cute. A new caped crusader

Jeff Moore, the father of this family, explains why he acted out an army storming the beaches with his children, “Those people were protecting us. We need to do our part.”

This thought persisted as the family played along the windy shoreline. So, with Katie’s encouragement of his idea, (she assured him that she didn’t think that it was some kind of sacrilege), Jeff decided to try taking a picture in homage to the men who climbed Mount Suribachi during World War II. We did this because we believe the battle for the rights of children is just as real a war as theirs was. 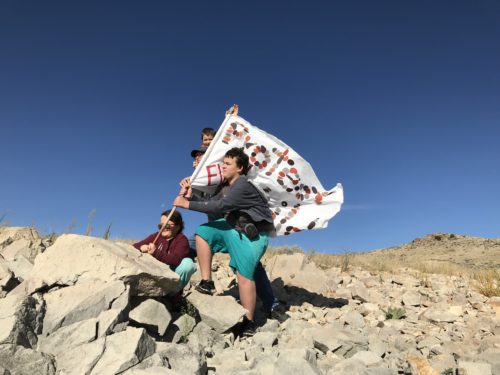 We thought of George Washington crossing the Delaware.
We thought of our own aboriginal heritage; of the mighty Polynesian navigators of the sea.
Then we thought of Disney’s Moana. Suddenly Moana, Maui, and even little HeiHei were all aboard!

The Clark Canyon Reservoir is located exactly on the 45th Parallel.

“After our spring trip to Ringing Rocks, Montana,
we were glad to fly our banners here again
for our abuse-survivor mom who is PLDSC story 622,
for ourselves, and for Protect Every Child.”

(While we were there, we ran into a familiar face at the gift shop…)

“Love your children. Don’t abuse them. Don’t allow others to abuse them.

The Church will change when people stop coming, but there will always be enough sheeple to keep filling the pews.

All you can do is make sure you’re not among them.”

Though still members of record, the Jeff and Katie Moore family has not attended any LDS Church meetings since January 2019.

A still-trusting survivor of LDS ecclesiastical bumbling herself, Katie was shaken to the core in 2018 to learn the truth that she and her husband had actually NOT been able to protect their older children, now adults, from becoming a second generation of LDS abuse victims like their mother. Jeff and Katie learned of multiple incidents of LDS ecclesiastical abuse and/or leadership incompetence perpetrated upon these children.

* Beginning at the age of twelve and continuing to this very day, a child has been severely traumatized by the fear instilled in them of a permanent fall from salvation and separation from family.These threats were made repeatedly, by more than one church leader, but always during one-on-one interviews. These presumptive comments, these preemptive and baseless accusations upon an innocence this child maintained in the very fear that these leaders created, were and always have been related to keeping the law of chastity. It is our opinion that this fear is damaging this child’s self-esteem and basically enslaving her to the Church.

* A child was not defended from the behavior of a teen molester at BSA camp, nor was the molester ever punished by church discipline when the incident was made known to the bishopric, nor was the incident reported to law enforcement. This caused their child to become less-active, question the faith, investigate it and eventually officially resign. In the meantime, the molester continued to bless the sacrament and left for his mission right on schedule.

* During the mission of one of the Moore children, the mission president and his wife subjected that child to numerous abusive and manipulative techniques outlined in the BITE Model of Mind Control.

Though still forced by law to interact with Katie’s ecclesiastical abuser until 2018, the Moores thought they had done everything else that they possibly could to protect their children from all forms of abuse. The desire to protect them from harm has been the primary reason for numerous choices they have made as parents. Therefore, it was quite traumatic to come to the realization that the first abuser had been the main abuser… had been the trusted abuser… had therefore been the overlooked abuser… had been the Abuser of the LDS Church all along.

*The Moore’s concerns were raised again in January 2019 by the new “group think” policy of advancing all age-groups of youth, all at the same time, like cattle. One of their children became uncharacteristically upset with the changes, saying that they neither wanted to nor felt ready to advance. Not only that, but they felt completely discounted and ignored as an individual by the Church.  As parents, the Moores’ own questions were also raised: “What is to become of that honest-hearted teen who has something for which they feel a burden to repent, all in the midst of this heavy, perfectionistic peer pressure? In front of an audience of leaders,  peers, and the parents and families of peers, all of whom are now present in the room for the mass January ordinations, any unworthiness at all would become even more painfully conspicuous to everyone. Church authorities could – and unscrupulous ones surely will – use this annual January event as a huge shaming tool of threat against any youth during the rest of the year.” To avoid any such exposure or to survive in this oppressive ecclesiastical environment, wouldn’t dishonesty, non-disclosure and hypocrisy quickly become the order of things for all but the most honest and courageous of LDS youth?

* In the face of many local church units ignoring the guidelines for two-deep leadership with Primary and Youth, the spring 2019 news of a survey among LDS members to inquire about worthiness interviews for Primary-age children, disturbed the Moores even further. Again with this hastening, this deeper, earlier grabbing for souls, this preying down into the formerly protected and untouchable ranks of younger and younger children. Why?!

* The LDS Church Handbook has now effectively banned the U.S. Second Amendment on all church-owned property. While legally licensed citizens with conceal-carry permits may NOT exercise their right of self-protection, all levels of government-employed law-enforcement may still be armed. Is nobody else bothered by this?

Realizing that they alone are their children’s first line of defense, and now accepting that abuse does not self-reprovingly stop itself from entering in at the doors of institutions, Jeff and Katie will not allow the same damage to happen to their remaining minor children. “We will protect every one of our children, even if it means turning away entirely from organized religion… and toward the God who has always patiently and lovingly been with us, even the God of Love.” 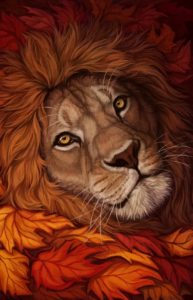