Protecting Children: This Is The Universal Issue

You are here:
Banners UnfurledGreenwood 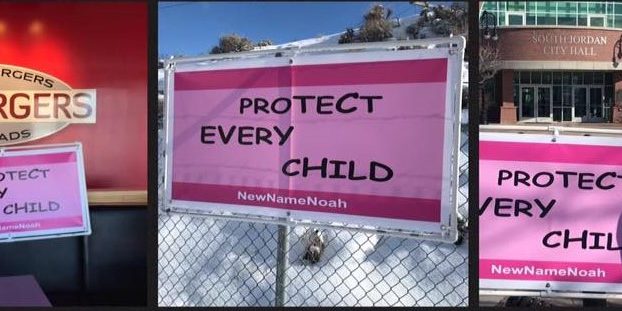 In the Salt Lake City, Utah area,
Larry Greenwood and his wife, Phyllis Tacker Greenwood,
have been very active in “supporting the protection of children from child abuse
caused or facilitated by inadequate safety policies,
[especially within religious institutions].”

They were involved with Sam Young’s prior movement to ProtectLDSChildren, and have continued to support this worldwide cause as it grew to become an ecumenical effort. Since early 2019, they have been posting signs and banners all over the Salt Lake area.

As Phyllis declared in February on social media, “Sam’s Young’s movement to Protect LDS Children, and every child has not gone away just because Sam was excommunicated from the LDS Church. This winter the warriors for this cause will be taking pictures of banners and flags to bring attention to this important cause. The movement to abolish one on one interviews between children with untrained bishops, who have no background checks, is still going strong.”

To which Larry added, “Just starting the 2019 season! Little Old Ladies are making a difference in this world wide Movement. Everyone can participate. Follow and share, be “for” or “against.” Be a part of it! Share and comment. This is The Universal Issue.”